The origins of the Alexander Technique 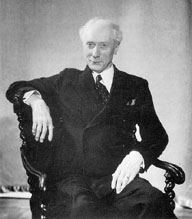 Frederick Matthias Alexander (1869-1955) formulated the Alexander Technique in response to his own vocal problems that threatened his work as a Shakespearean actor and reciter. As the medical advice he received was unable to cure his loss of voice, he embarked on ten years of self-observation to identify particular patterns of reaction that were causing his hoarseness. He also discovered that he used unnecessary tension in other activities apart from speaking. By avoiding harmful tension and encouraging free and efficient movement, he gradually cured his own vocal and breathing problems while at the same time improving his general balance, co-ordination, and health generally. Alexander Technique is now widely used, not only in the performing arts where its origin lies, but by everyone who wishes to learn less stressful ways of moving and behaving in order to address a fundamental cause of the majority of back and neck problems, overuse problems etc.